December 29th, 1999, 6:45 a.m. Its still dark. The sun hasn't yet peeked over the mountains here in the Big Bend area of southwest Texas. Outside my motel room, coyotes howl their greeting to the awakening day. The adventure begins!

Today Ill begin a four-day horseback ride in the high-desert mountains of Mexico.

At 9:00 I arrived at Lajitas Stables and met the rest of the group of eight who had signed up for the trip. There was jovial camaraderie among ourselves and the wranglers as we made final preparations.

We loaded saddles, bridles, blankets, and water bottles into a pickup, and then piled in for the short trip to the Rio Grande. A small rowboat made two trips across the narrow river delivering us and our gear into Mexico. We then loaded everything into still another truck and proceeded to the small town of Paso Lajitas and the corral where the horses were kept.

Our guides would be Linda Walker, the owner of Lajitas Stables; Onorio Orosco, head wrangler, and 18-year-old Kelly Sufficool. The three of them caught and saddled the horses, matching our mounts to our individual ability. Mine was a huge bay called Red Rock.

There was an aura of high excitement as we plodded along the dusty streets toward the Chihuahuan high Desert, mostly in silence with our own thoughts, taking in the vastness of our surroundings.

As we started up the first rugged, rocky mountain, I thought, "Oh God! Were going up THERE?" (An appropriate reply to that thought would have been, "Honey, you aint seen NOTHIN yet!") 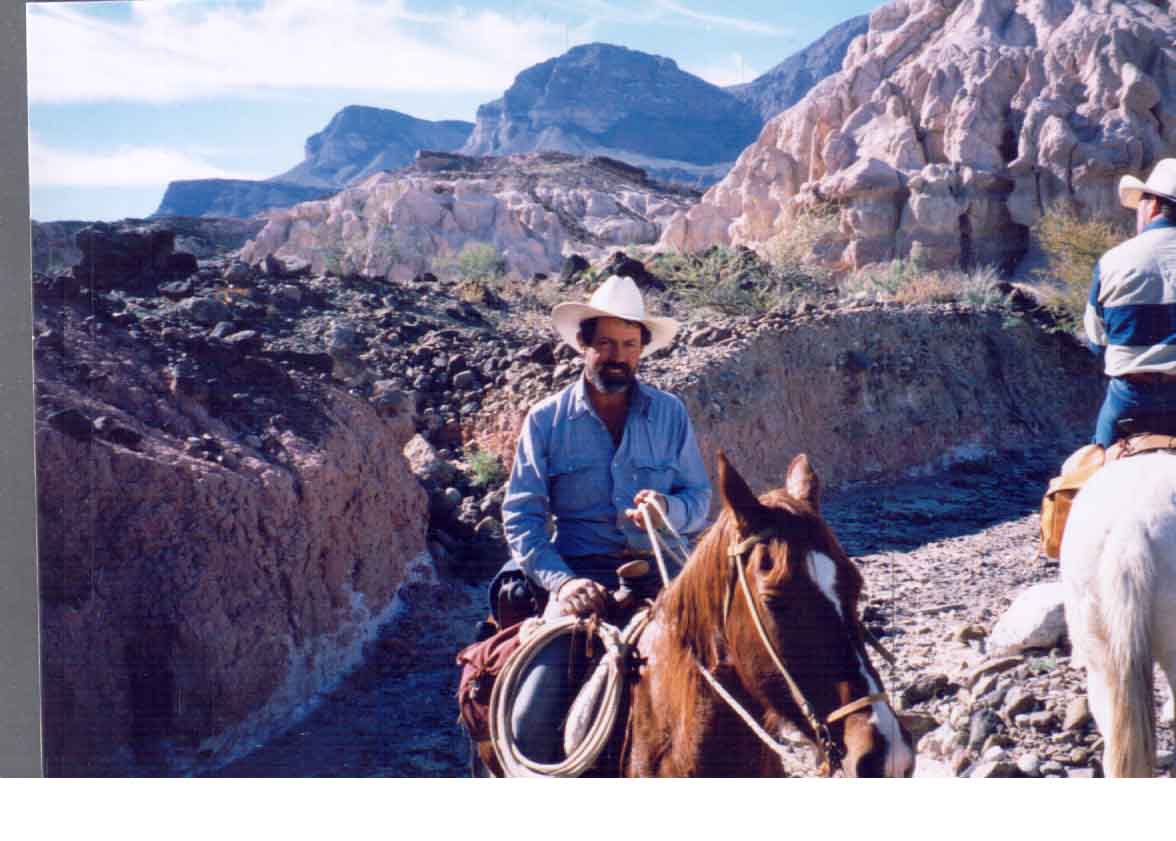 Todays route took us over increasingly high mountains into deep gorges and canyons, and wound through and along Los Mongos Creek. We ate lunch, spread on a large rock, under brilliantly blue skies.

Later we dismounted to explore huge boulders that have well-preserved pictographs.In this same area early inhabitants ground their corn on the immense flat rocks, which over years of repetition wore many deep circular indentations in the rocksome as much as a foot in depth.

About 4:00 p.m. we arrived at our camp site, near a small rock ranch house on Milagro Creek. The wranglers unsaddled the horses and put them into a corral. While Linda and the crew built a fire and started preparing dinner, the rest of us readied our sleeping bags.

After a hearty dinner and the telling of some tall tales, our weary but happy group crawled into sleeping bags for a welcome rest under the brilliant stars. When I awoke during the night, the Big Dipper was so big and bright that it seemed only about 100 feet above.

DAY 2. During a delicious, filling breakfast, Linda remarked that today wed be riding over much rougher terrain. (Oh, NO!) She was right. I had no idea that horses could even GO some of the places we asked them to go. We were advised: "Trust your horse; he is not suicidal." 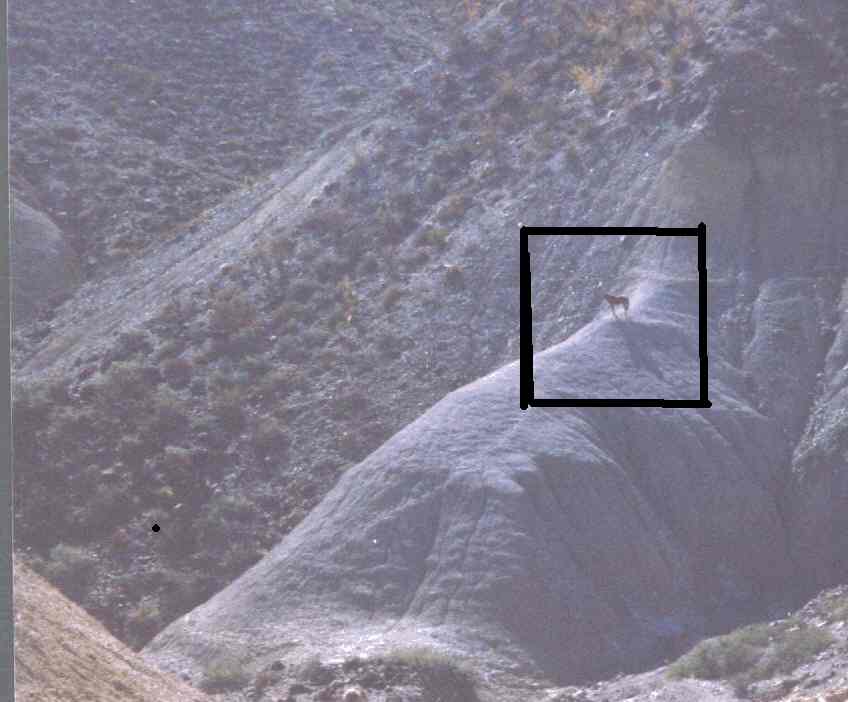 Heading for San Carlos, at one point we were on a high cliff and saw a horse on top of a bare mountain so far below that the horse appeared thumbnail sized. "How in the world did that horse get there?" I asked. "And WHY?"

We then proceeded to go exactly where we saw that horse. Why? It was just on the way to where we were headed.

This vast, largely uninhabited land is home to various wildlife, some of which are bobcats; mountain lions; javelinas; badgers; deer; coyotes; various snakes, lizards, and other reptiles; many kinds of birds including golden eagles.

Vegetation features an abundance of succulents, including agaves and yuccas; lechuguilla (a spine-tipped plant found nowhere but the Chihuahuan Desert that typically grows on limestone hills); tarbrush, creosote bush, ocotillo, and an impressive diversity of prickly pear and hedgehog cacti. The waxy-coated candelilla is harvested and processed for wax as a component in records, polishes, chewing gum, candles, lipstick, etc.

We saw thousands upon thousands of tiny bluebonnet plants emerging from the rocky soil. Linda said that around February, the mountains will be ablaze with color. Because of just the right moisture, temperatures and conditions, there will be a bluebonnet crop unequalled for the past 60 or 70 years.

Being in a place like this is a spiritual, empowering experience. Seeing plants surviving, even thriving, in the most inhospitable, unwelcoming environment that one can imagine, I am in awe at the voracious tenacity of life.

Youd think this mountainous wilderness would look pretty much the same, but it seemed that something different appeared around every turn. We rode by volcanic boulders of basalt atop light-colored tuff and ash deposits, past lichen-encrusted volcanic rock and fluted limestone walls; over rocky terrain; and sandy hills. The areas geological history is readily observed because there is little vegetation to obscure it. Its timeless beauty is awesome and inspiring.

Along an ancient trail to San Carlos, we ate lunch on a high plateau among huge cottonwood trees surrounding a lovely spring at the ruins of the La Mora ranch. From here we overlooked the valley that spread for miles below, and the Santa Elena canyon on the Rio Grande.

Our days journey almost completed, we rode across a wide area of solid white rock where centuries of hoofbeats have etched a trail several inches deep. 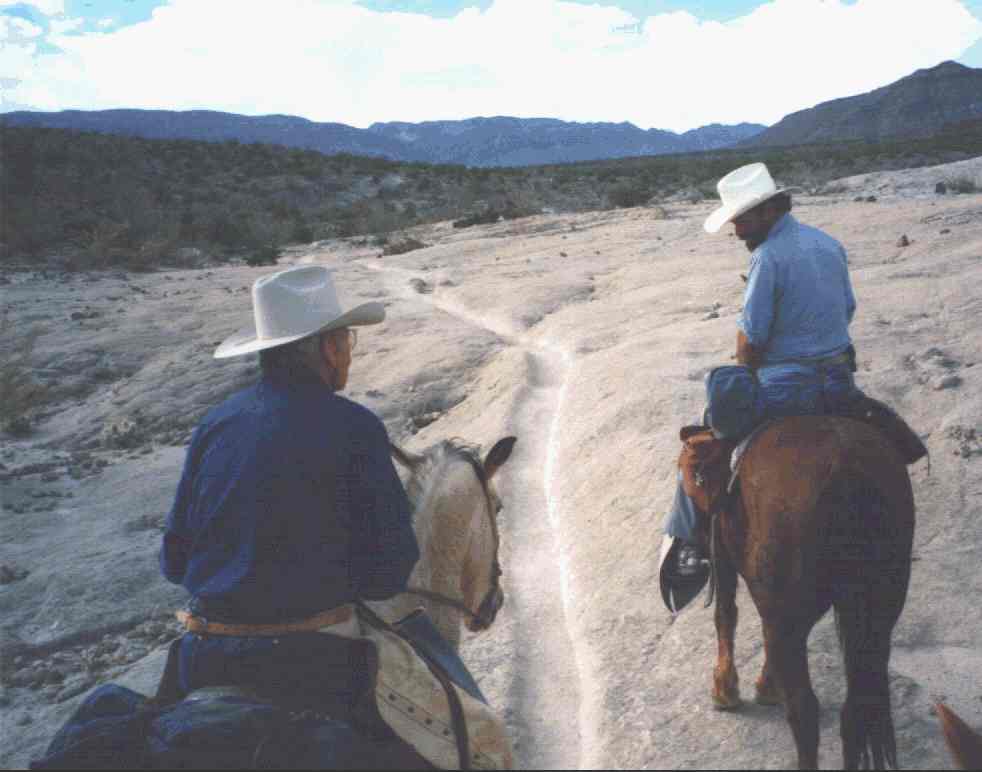 Down from the hills, we headed toward San Carlos in the distance as we crossed a flat area of desert shrub.

Approaching Glorias Bed & Breakfast, I was surprised to see such a large, lovely, modern home with beautiful well-tended gardens. Everyone enjoyed a shower before dinnerseldom has one felt so good! Gloria Rodriguez is a charming, personable hostess. She serves delicious food and plenty of it.

In the afternoon, one other woman, Debbie, and I declined the optional horseback ride to some waterfalls. After Gloria drove me into San Carlos and showed me the town, then the three of us went in her pickup to the waterfalls and met the others.

After dinner, as we chatted and visited and danced a little, waiting to usher in the New Year, one of Glorias friends, Jorge Gomez, came to visit. Jorge is a Lieutenant in the Army. He understood a little English but could not speak it. I had a great time conversing with him in Spanish.

DAY 4. Today wed ride all the way back to Paso Lajitas. We were mounted and underway by 10:00 a.m. Even though we were miles away, the horses knew they were headed toward home. Ears pointed forward, they were in a hurry. Today we had several opportunities for lengthy gallops, and the horses were eager.

Other times we went through and over terrain so rocky and rough that at one point we had to dismount while our guides led the horses, one at a time, down a steep precipice.

After having perfect weather with cool nights and warm sunny days the entire trip, just as we neared Paso Lajitas we were reminded of the unpredictability of Mother Nature in this rugged area. A sudden raging sandstorm made it almost impossible to see. Fortunately, it all blew by within about half an hour.

Back at Paso Lajitas, I kissed Red Rock and thanked him for an excellent ride. 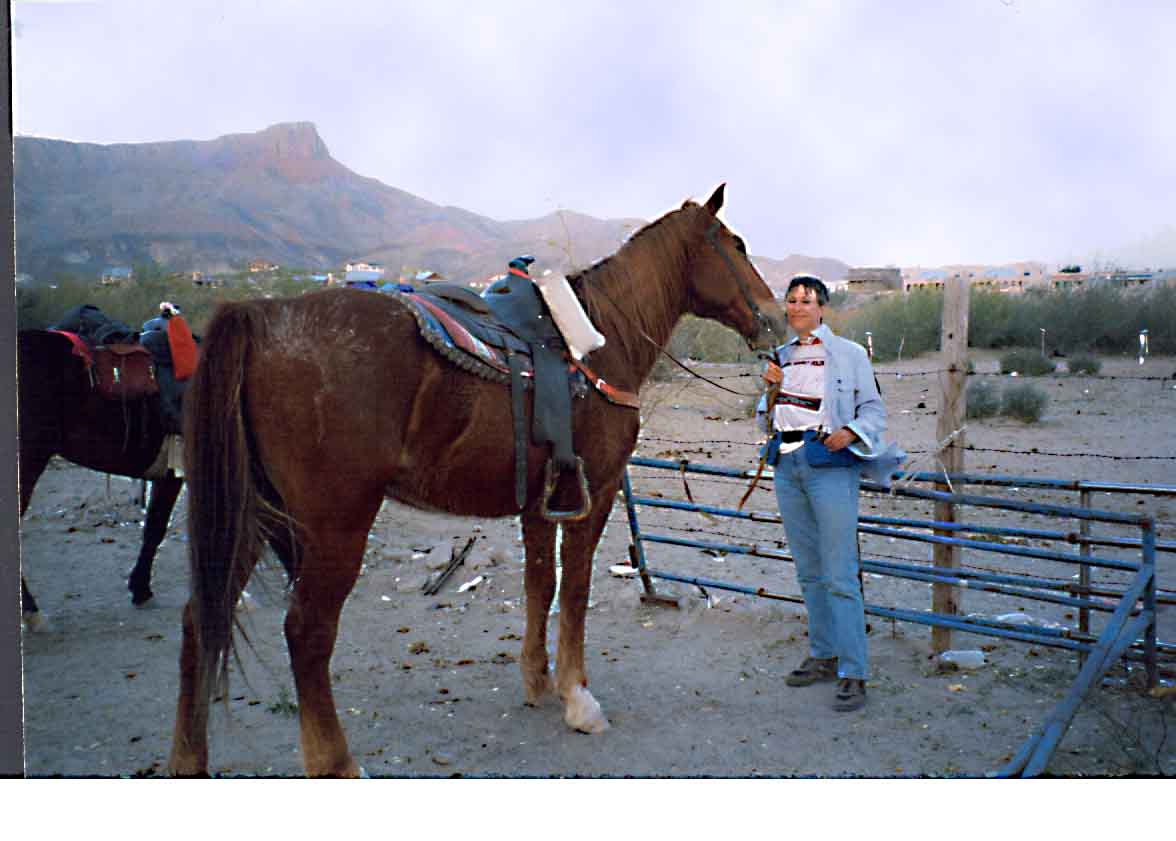 None of our group was ready to say "the end," so after rushing off for quick showers, we met for dinner at the Starlight Theater in the ghost town of Terlinga. The restaurant had been a movie theater in the early 1900s, entertainment for the miners of quicksilver (for the production of mercury). At that time, quicksilver mining operations flourished. Mining activity in the Terlingua mines ended in the late 1960s, and the movie theater sat vacant for many years until it was opened as a restaurant. It offers good, inexpensive food and live entertainment, and is frequented by the locals as well as tourists.

After dinner, we all exchanged e-mail addresses and big hugs, and bid each other a fond adios and hasta la vista.

The experience was differentand morethan I expected. I once read about travel that if a person doesnt return changed from it in some way, he might as well have stayed home. I believe that this trip was empowering for each of us, in that we were called on to stretch beyond previously set limits, and at times to summon courage, strength, and inner resources that we didnt know we had.